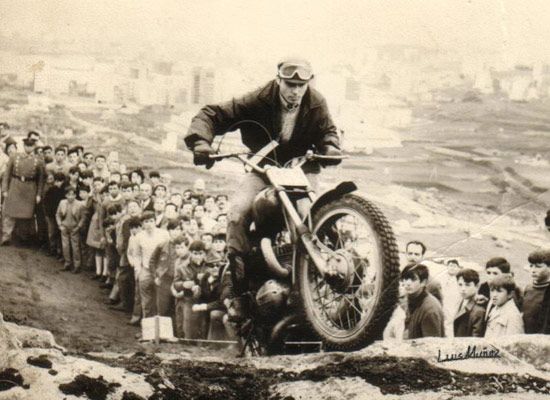 Luis Muñoz-Aycuens is one of the pioneers of motorcycle trials in Spain. Recently he commented on a social network the first entry of my blog «Empezar la casa por el tejado» with these words:

“Congratulations for the blog and the article! You did a perfect summary of the problem of management motorcycling in Spain, especially trials that are the most disadvantaged. I hope the managers of our sport read it and it is useful as a positive criticism. ¡¡If you let us we will help you!!

Luis is from the old school, just look at the photo and you can see him disputing a trial in La Coruña back in 1965 with an old Bultaco Sherpa model 10. Walking back his life, he keeps on doing trials, conserves his old Sherpa and a lovely Triumph Cub, making trial with them and leaves the door wide open to hope with a real sportsman attitude with those last two sentences that only an experienced person can transmit so serenely, in which he calls to the appropriate self-criticism and also reaches out his hand to them ¡¡If you let us we will help you!!

Well if you leave me I’m in that with you Luis, if they let us we can all give a hand so trials can live another golden era of the sport where a lot more people can enjoy it rather than those in the cold statistics of the CSD. I’m in for work so that new blood and also old blood like yours or mine can practice our sport and help get the entire trial lives a new beginning.

«My story begins in Sant Adriá de Besós in 1965, I have never been able to know when and how I learned it, but I always had in mind that that year’s best trial riders were Don Smith, Jacky Ickx, Gustav Franke, Bill Wilkinson, Gordon Farley, Peter Gaunt … and somebody named Sammy Miller won the Scottish Six Days riding a Bultaco.

By the way, I’ve never understood why so strongly Scotland magnets us, but none of us can get rid of it.

I keep in my heart the first time I saw the light, that endless journey from Catalonia to Madrid on a Pegaso truck, and especially I remember the first night at home and that first walk through the mountains of Madrid, the smell of the rockrose, the touch of the granite, the feel of the cold mountain water across the streams or the soft slippery slide after stepping on a root bathed in mud. I could spend whole days walking the mountain without stopping, up from Cercedilla by the old Roman road and cross to Segovia side, lunch in Valsaín and quickly back so the night not caught us through in the dark paths. Climbing up to Bola Del Mundo was always a challenge, but I enjoyed specially the climb through the firewall to Abantos to continue after on the moors of the north slope to Peguerinos. 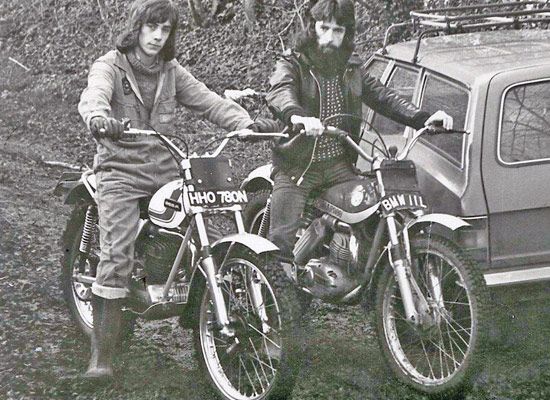 During the golden years I have done a lot of trials, thousands of miles of route and thousands of sections. Took part in many competitions, from the Casa de Campo to Robledo de Chavela, even once traveled to Catalonia to see and share sections close to our idols in Santigosa and made our first steps into a world champ in Matadepera.

I remember well the days I spent in Cauca Motorcycles, Madrid´s Bultaco dealer in Palma Street where so many people came to see me, the proud brand new Bultaco´s trial motorcycle, the Model 10 Sherpa.

It was not long until somebody decided to buy me as a gift for his son for passing the pre-university course, and keep in memory like it was yesterday the first night my young owner spent by my side in the garage, waiting for dawn to finally take me out to the mountain.

Men do not know, but we objects need people to desire us, and we enjoy being useful. Forty years ago gradually I stopped being useful, since the width of my red and grey petrol tank gradually became a nuisance, since slowly my skills were superseded by others and it was forty years ago when I was finally cornered, forgotten and stored as a rusty junk in a deep and dark corner of a warehouse. Forty years without seeing the light and yearning the close contact with nature which I loved and that was the main reason for my existence, since then I keep asking every day a wish to escape this fate to make someone´s life little sweeter and better…”

I have never asked one of my classic bikes to tell me it´s story, I imagine that if it did probably would take me a fright, certainly nobody would believe me or maybe rightly, I was interned in a psychiatric hospital. But surely if the Sherpa model 10 that in 1965 was used by Luis Muñoz-Aycuens could speak, her story would not be very different from this I have told you. Shared history with so many thousands of dirt bikes that have long been condemned for scrapping to rust in a dark warehouse or very luckily to be part of a private collection condemned to be a merely static object without any use.

But life takes many turns and occasionally surprises us with an unexpected twist.

Who would have thought in the late 80’s that old bikes of the 50, 60 and 70 were to have a second chance? Who in their right mind would have predicted then that with the arrival of the new century the sport of trials would have a new beginning? But slowly but surely, the classic trial gained strength again and spread its roots within our little world of trials. 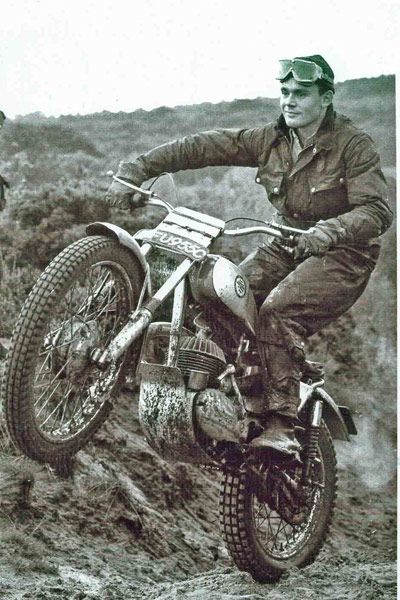 They say that both the Scots and the Catalans are quite gripped and do not throw anything away if they suspect that in the future may be useful or think that what they have is worth something, however slightly. Thanks to this way of thinking, thousands of bikes that seemingly worthless have been saved from the scrap, and now form part of a potential new industry that has brought about the rebirth of the classic trials.

Many pilots have restored their old motorcycles and others who could not enjoy having their desired Ossa, Bultaco or Montesa at the time, have decided to buy and restore one; or even more than one in many cases; take a license and participate in classic trials. Other pilots, overcome by the modern trials technique and sections have discovered the simple fact of doing a sport as a hobby, have discovered a new and friendly way to enjoy our sport and all surrounding a good trial, a journey, a good meal with friends or a spectacular route in the depths of a forest or in the top of a mountain.

Some Spanish clubs have embarked on organize truly remarkable events that have nothing to envy to many of the major international classics trials; Cabrianes, Robregordo, Santigosa Classic, Pobladura, Costa Brava, LARS, Maeztu, Ripoll, All, although some of them with planning mistakes that detract participation year after year and jeopardize the continuity, are certainly superb events that could serve as an example of how to give an injection of hope and strength to modern trials as forging champions is a very honorable and necessary work, but much better would be to make the sport of trial reach thousands of fans so they could enjoy plenty of good, affordable events, being able to eventually support brands, pilots, clubs and federations. It would be better and fairer, it would also be more honest and honorable in my opinion.

That the Spanish are different is something that neither we question ourselves, «Spain is different» is the motto that we strive to proclaim to the four sides to make it very clear. The only ones capable of throwing stones to our own roof to show the others that we are right.

Every country sees the classic trial as a new opportunity, as a way to expand the horizon as a way of having more federates, more events, more industry, more clubs, with more fans in a sport that really create a lifetime hobby, opening a door and giving the battered modern trials “new old ideas” that work. 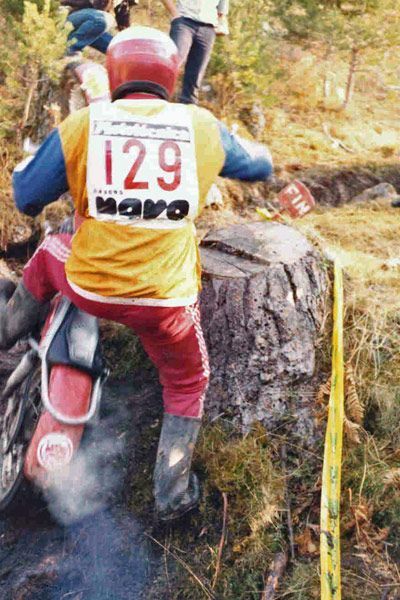 In no country except us in Spain, where some see the classic trial as a threat, as a form of competition, as a way to lower the sales of modern bikes, as a way to lower participation in modern events. Some that tries to simplify the classic trial in a new and easy way to raise funds. Or those that focus classic competitions as if there is any need to build champions, neglecting again all those who just want to make their favorite sports and have a good day.  It will not work this way.

As that 1965 Bultaco Sherpa model 10 would for sure tell us today if it could speak:

«I made a wish and it came true. Some magicians varied my condition. Mechanics, painters and upholsterers; polishers, turners and millers rebuilt my engine, removed the rust that corroded me, chromed, zinc, restored, painted and fitted my pieces, sheathed my seat, equipped me with modern electronics and shod me again with brand new and incredibly soft tires.

Thanks to them I have benefited from the most modern technology and have kept the advantages and the essence that I had in the old times. I walk around Spain and Europe competing again proudly in big trials. I have work again.

I attract the eyes of friends and strangers when I pass by the street, I am proud of who I am, a 1965 Bultaco Sherpa Model 10 in use, and hope the dispute between the old and new ends at last, I hope that finally our common destiny in trials is sealed.”

Let´s try to give them all the work that we can, our old bikes deserve a new beginning; modern bikes need it. As generously offered by Luis Muñoz-Aycuens: ¡¡If you let us we will help you!! 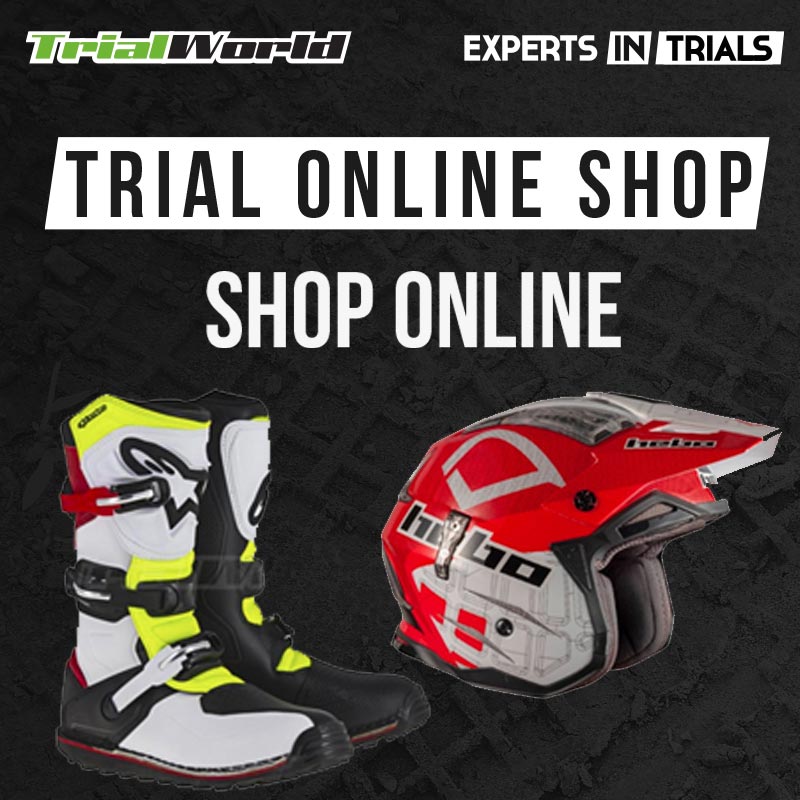 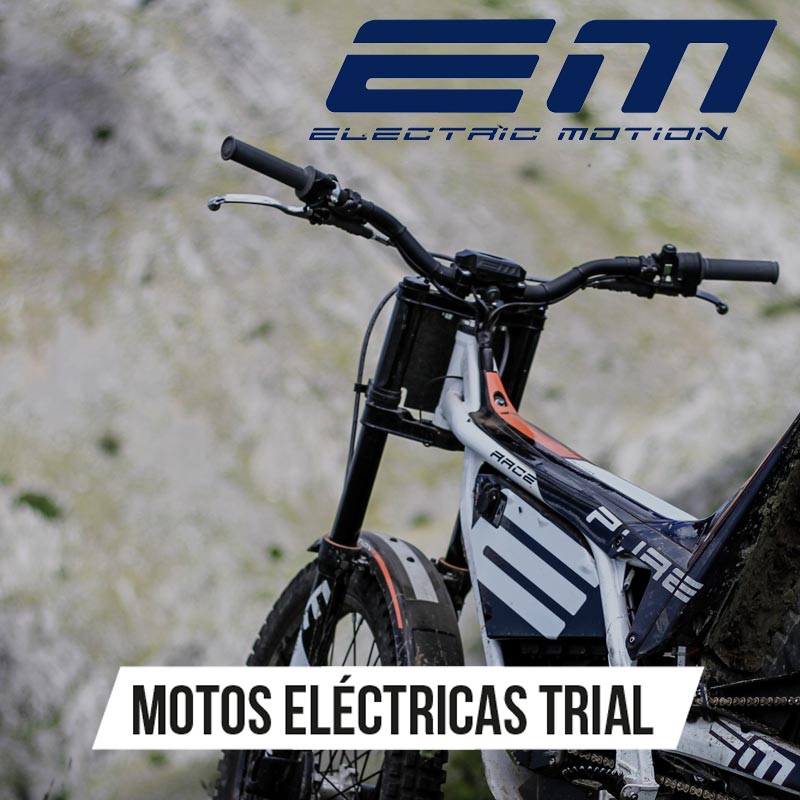 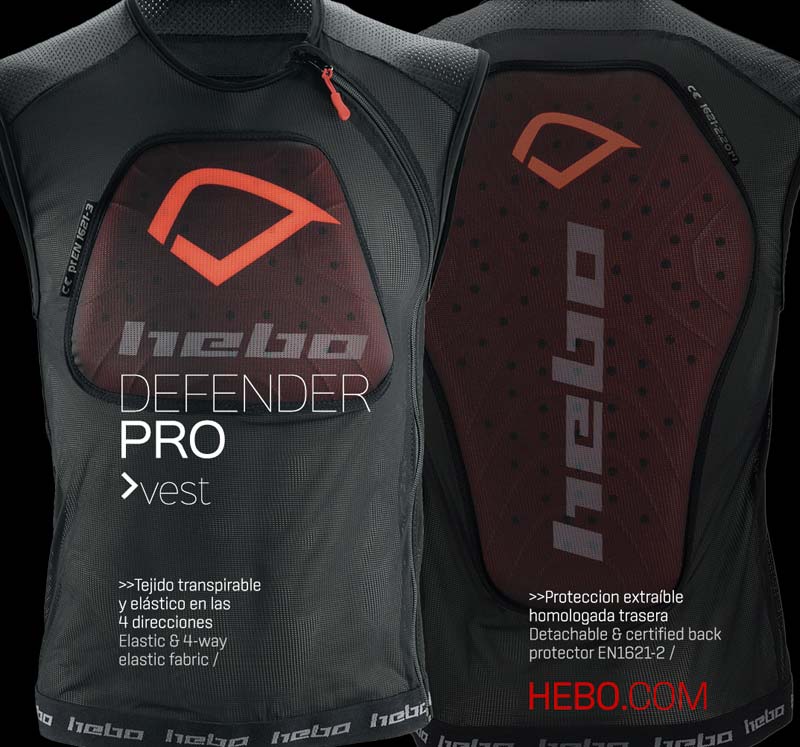 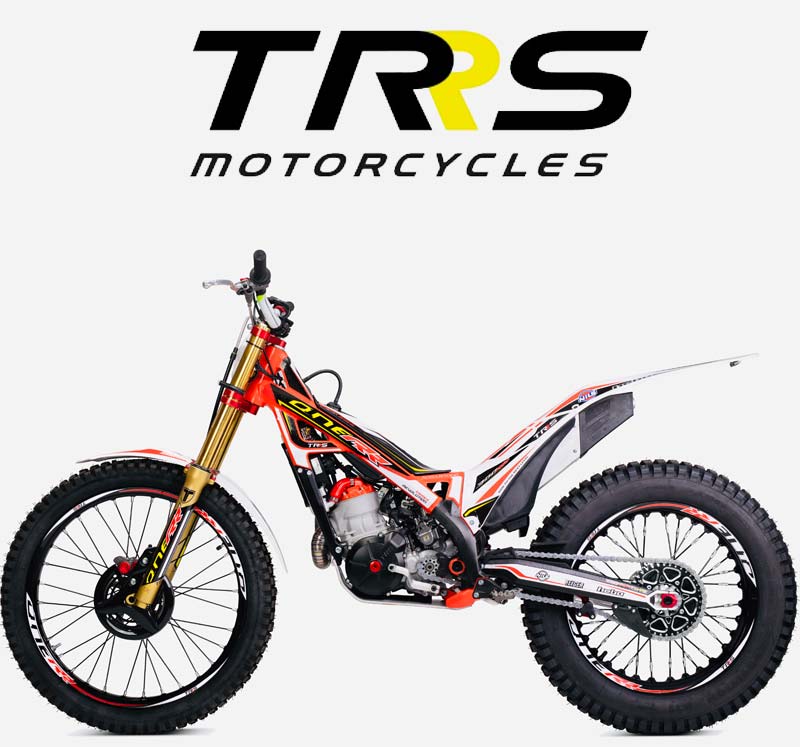